I’ve been here a few times now and it’s always nice to kick back and relax with the family for a few days. Days are bookended by the breakfast buffet at the hotel and evening meal at the local hawker centre, with lounging by the pool taking up a fair proportion of the rest of the day. What’s not to like?

A trip into Penang is always worthwhile too, especially since the old streets obtained World Heritage listing in 2008, coincidentally also the year of my first visit. It’s quite interesting to see how the city is changing, developing a bit of a hipster culture in places while keeping the hawker aspects alive and well. The amount of street graffiti continues to grow too.

We flew to Singapore a few weeks ago, for a few days before continuing on to Malaysia to visit Jacqui’s Dad. It was my first time visiting Singapore, only having stopped at Changi on the way to Europe previously, so it was nice to wander around and get a feel for the city state.

On the surface it’s a little antiseptic, everything spotless in the touristy section, not much traffic on the roads, same shops etc. as everywhere else in the world, epitomised by the Marina Bay Sands’ “The Shoppes” - complete with fake Olde Worlde name - where you won’t find a store that isn’t a designer brand. Yet you often round a corner to where the real people live and work and it’s busy, vibrant and full of hawker stalls selling cheap, tasty food. I’m not sure if it was Anthony Bourdain who said that all good food comes from street food, or maybe it’s a truism amongst chefs, but it’s certainly true in Asia and particularly in Singapore as it has always been such a melting pot of cultures.

It’s also a surveillance state - I’ve never seen so many CCTV cameras keeping an eye on everyone - and I wonder how much is being done with the footage. Is it merely temporarily recorded in case of crime, or are they heading the way of the Chinese and applying facial recognition on a large scale? Cars are also stupidly expensive (circa $95k for a Hyundai i30 which costs about $22k in Aus), which explains the lack of traffic, though the public transport system is excellent, so that’s an overall win in my book.

Single-party Government is always a bit suspect, though the country scores highly on lack of corruption etc. and elections are technically free, though there’s no effective opposition. The ‘benevolent dictator’ model seems to have helped them transition very effectively from Colonial rule, certainly much better than Malaysia has, though the large income from trade coupled with only a small land mass to manage has undoubtedly made things easier.

Anyway, some superficial thoughts from a superficial visit. We had a great time exploring by foot over a couple of days. Highlights were the various hawker stalls, Tiong Bahru, walking through Chinatown, Kampong Glam and Gardens by the Bay and seeing the Supertrees light show.

I’ve just finished almost two week’s holidays with my brother and his family. Although Cormac had visited me briefly when I was in Sydney, his wife Belinda and son Jacob had never been to Oz before, so we made sure to cram as much as possible into the ten days they were here for.

First off was a whirlwind tour around Brisbane, making sure to get a photo at the iconic sign. 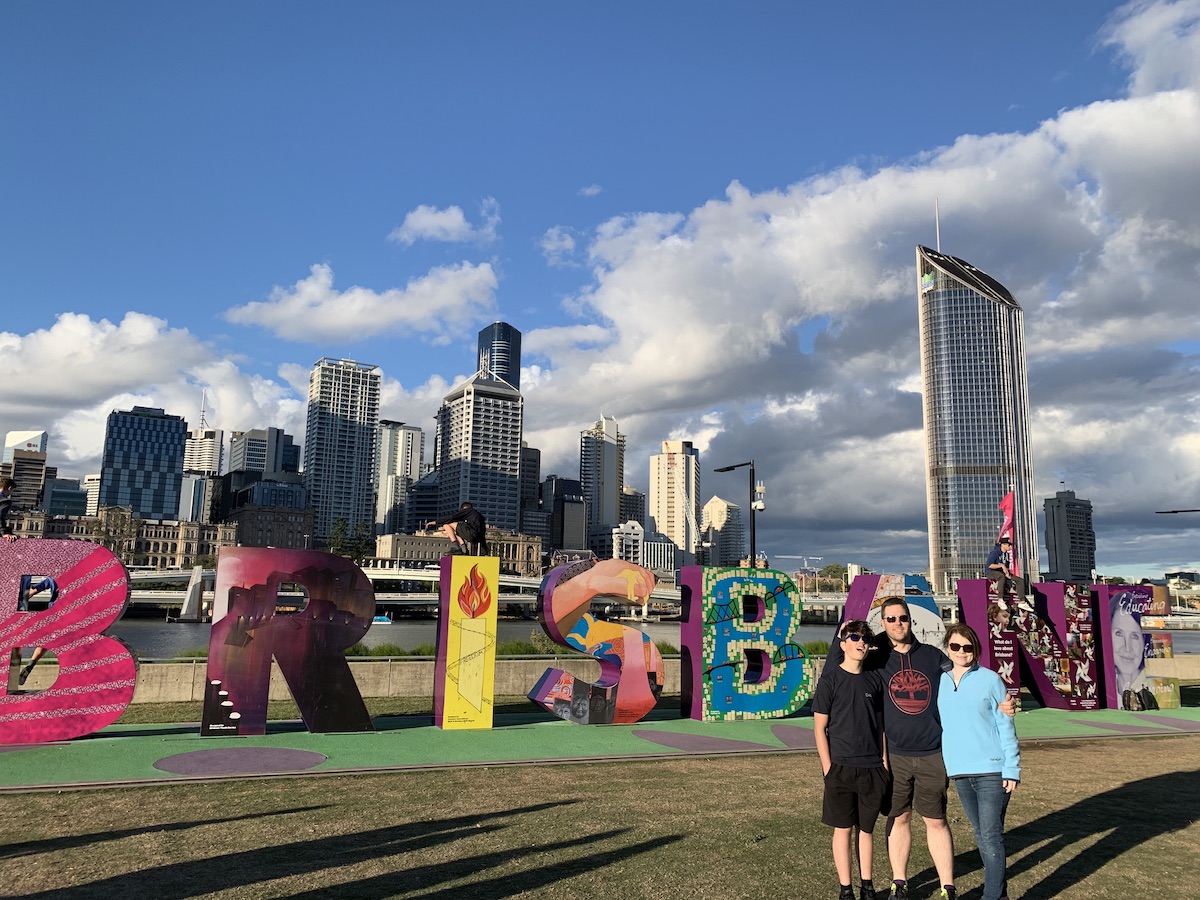 Then it was off to Lone Pine Koala Sanctuary to see some Aussie wildlife. They’re a bit more relaxed with Koalas in Queensland, allowing you to hold one while getting a photo, so we took that opportunity to tick off a bucket list item for Belinda. It’s a sanctuary for over 130 koalas, so each animal only has to deal with people for a very short time before going back to munching on eucalyptus leaves and sleeping. 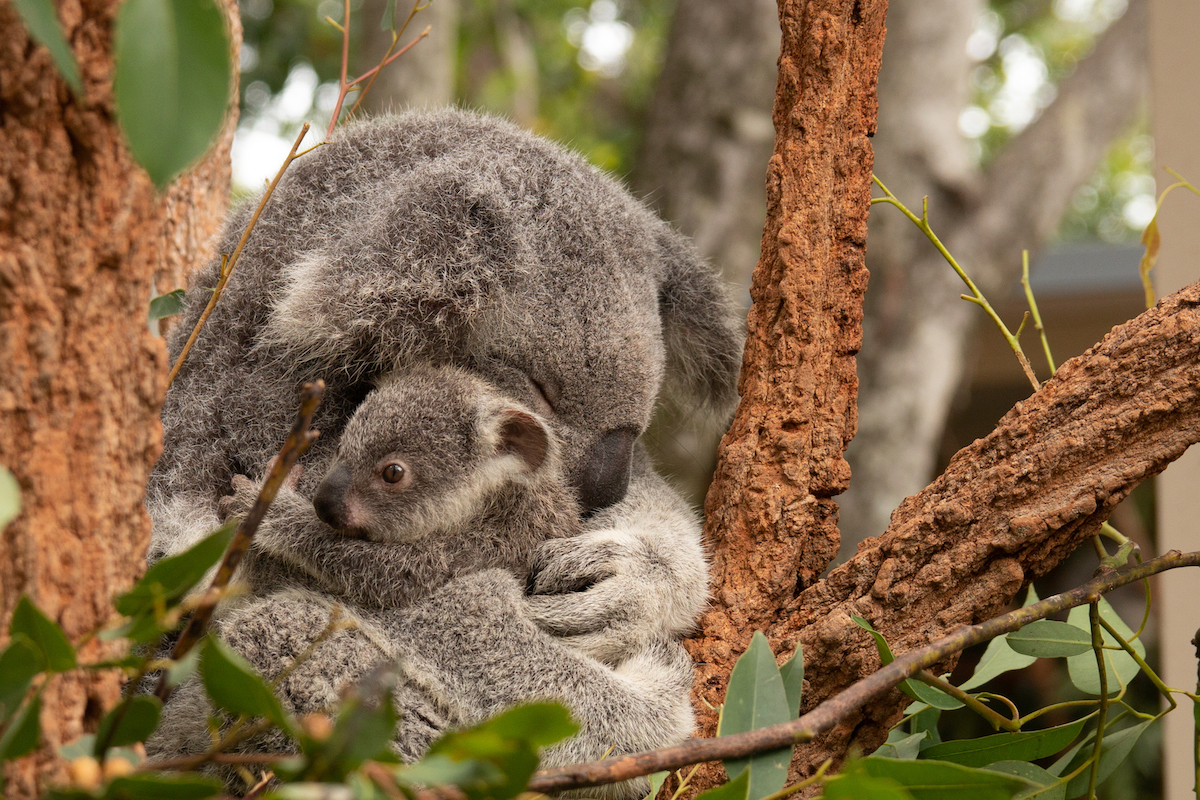 There are plenty of other animals on site and we got to feed some kangaroos and wallabies and also to see wombats, dingoes, Tassie Devils and more. I’d assumed we’d be there for an hour or so, but we ended up spending most of the day there. Well worth a visit.

Next stop was Port Douglas to go diving on the Great Barrier Reef. Cormac and Jacob had been getting their PADI licence specially, and I’d dug up my qualification I’d last used in 2002, so we were good to go. We booked with AquaQuest and I took advantage of their free “Intro” dive to do a quick refresh of the basics before doing a normal second dive with Cormac & Jacob. A great day out on the boat with a fun, professional crew looking after us and no sea-sickness despite the choppy conditions.

We managed to see some nice coral, found Nemo and spotted reef sharks, parrot fish and plenty more, though we missed out on turtles. 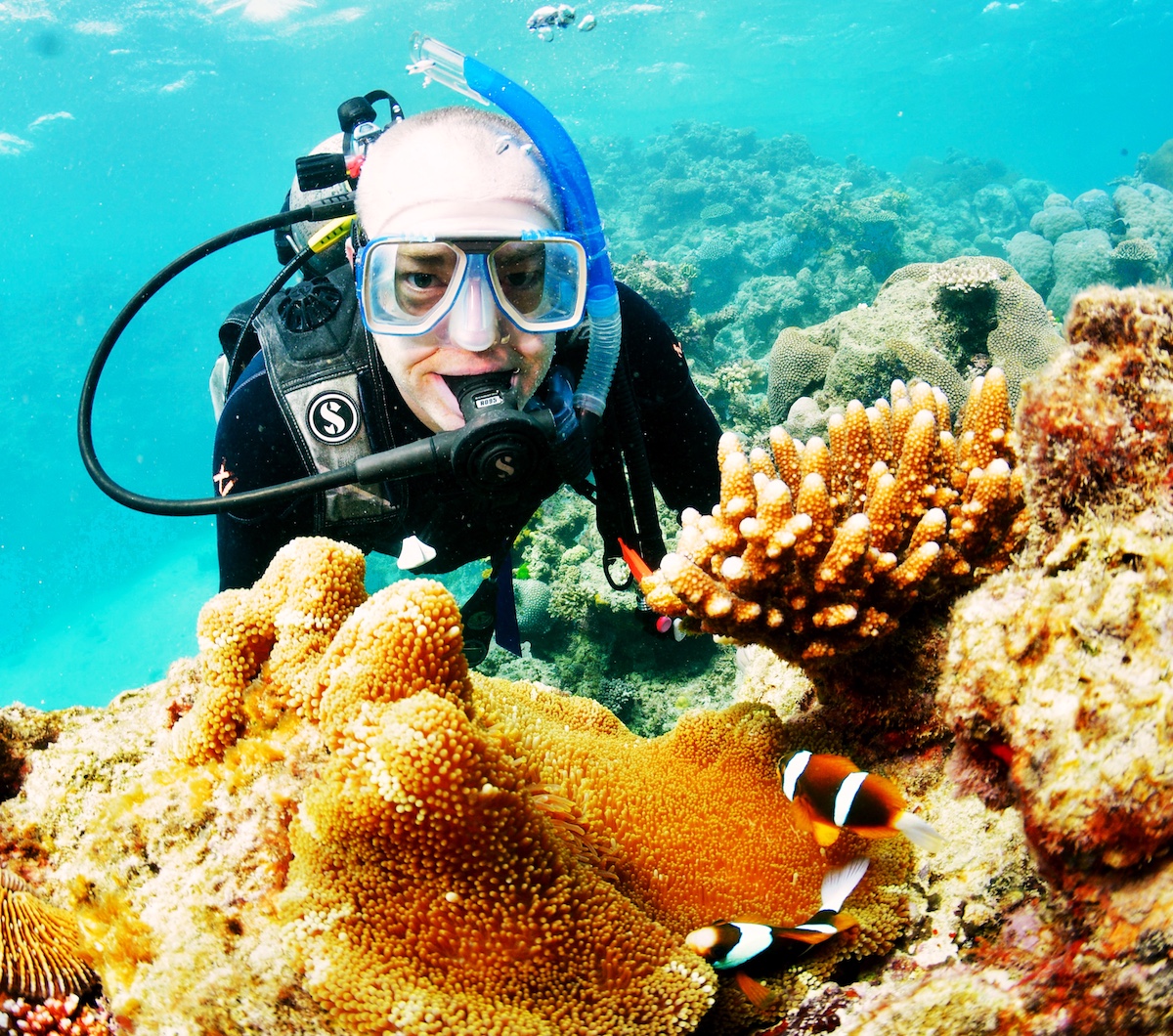 After the day on the ocean, it was time to investigate the land, so we opted for a walk through Mossman Gorge followed by a crocodile tour on the Daintree River aboard Solar Whisper which, as its name suggests, is a solar-powered boat. We got up close and personal with five different crocs in all, ranging from a 50cm juvenile to a 4m adult, while getting a running commentary on their personalities and behaviour. 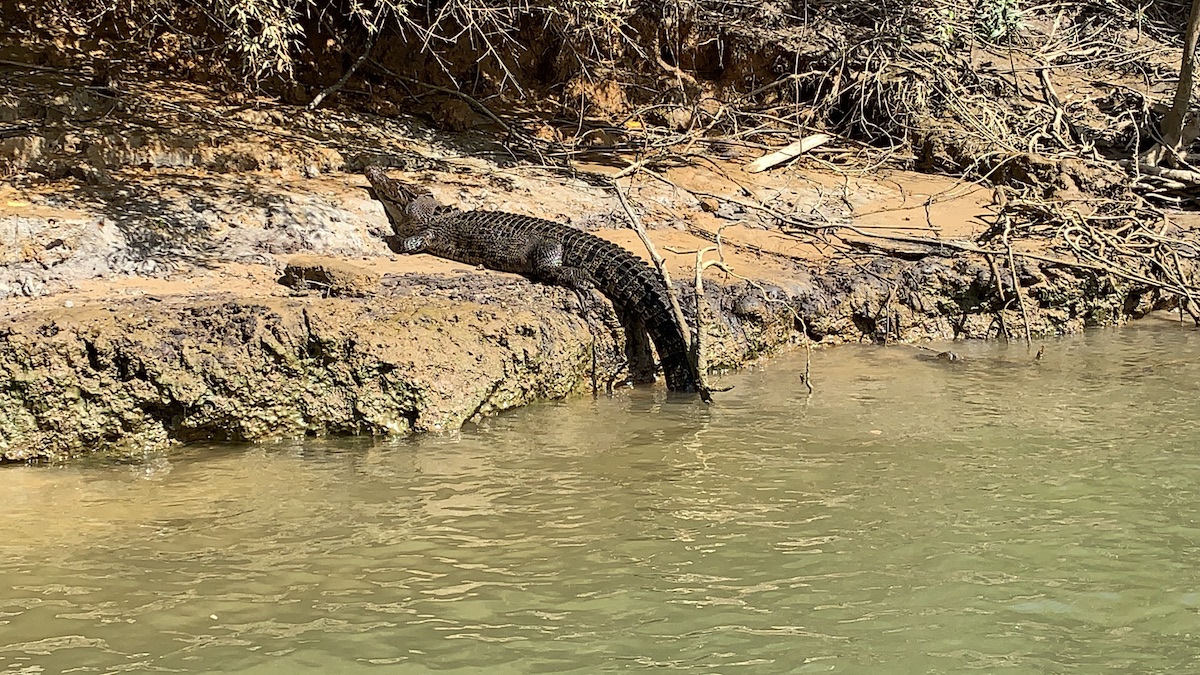 We continued on up to Cape Tribulation, stopping at Daintree Ice Cream Co. to sample their wares. They grow a huge range of exotic fruits which they use to make their ice cream - check out black sapote if you come across it, a fruit with brown flesh which tastes like chocolate and has four times the vitamin C of an orange. Delicious!

We flew back to Brisbane for a day of relaxation before jumping in the car to visit my mother-in-law down near Byron. The weather wasn’t great on the first day, but the Paddies seemed happy enough down on the beach with the rain approaching! 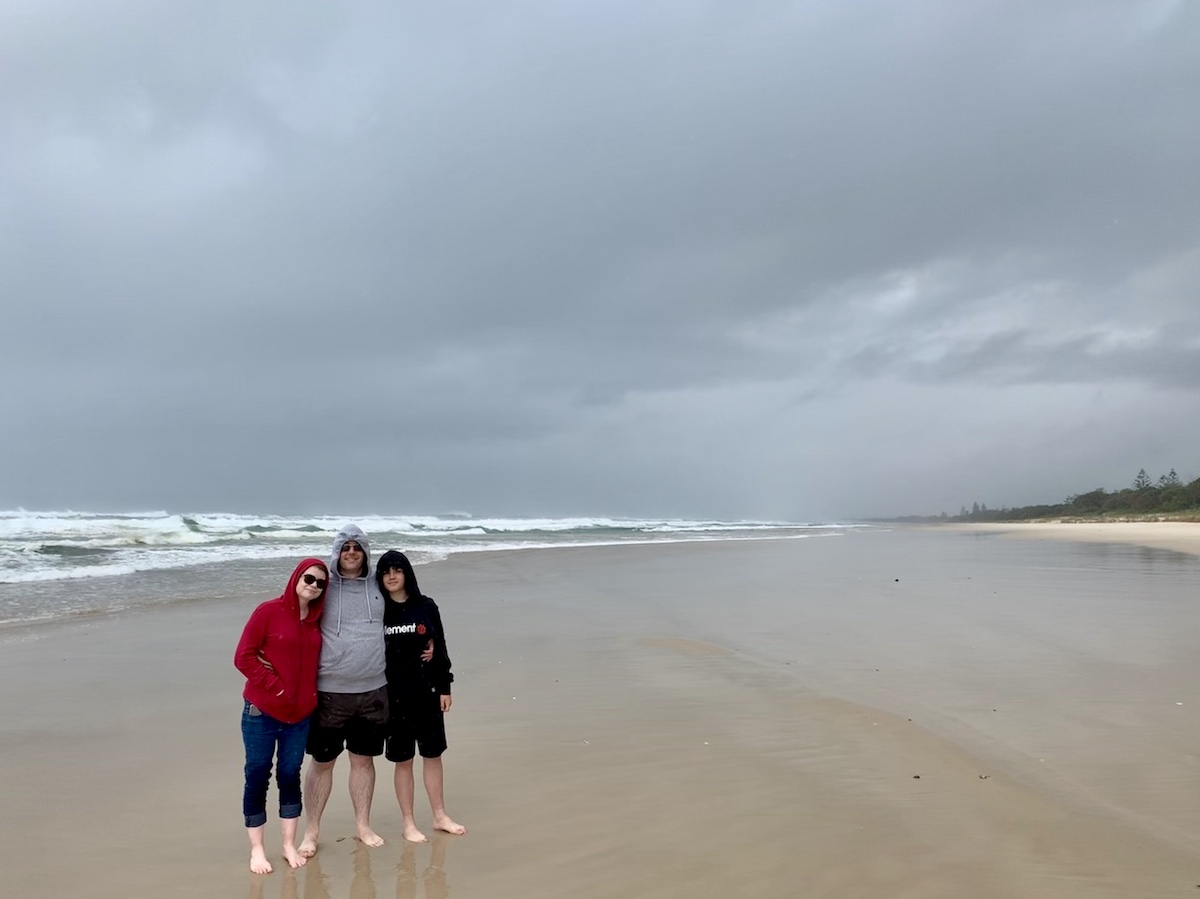 The sun came out for the last day of the holiday, so we ventured in to Byron to check out the most easterly point in Australia, admire the views from the lighthouse and spend an afternoon swimming at The Pass. We even spotted some Humpback whales to round out our Aussie fauna tour! 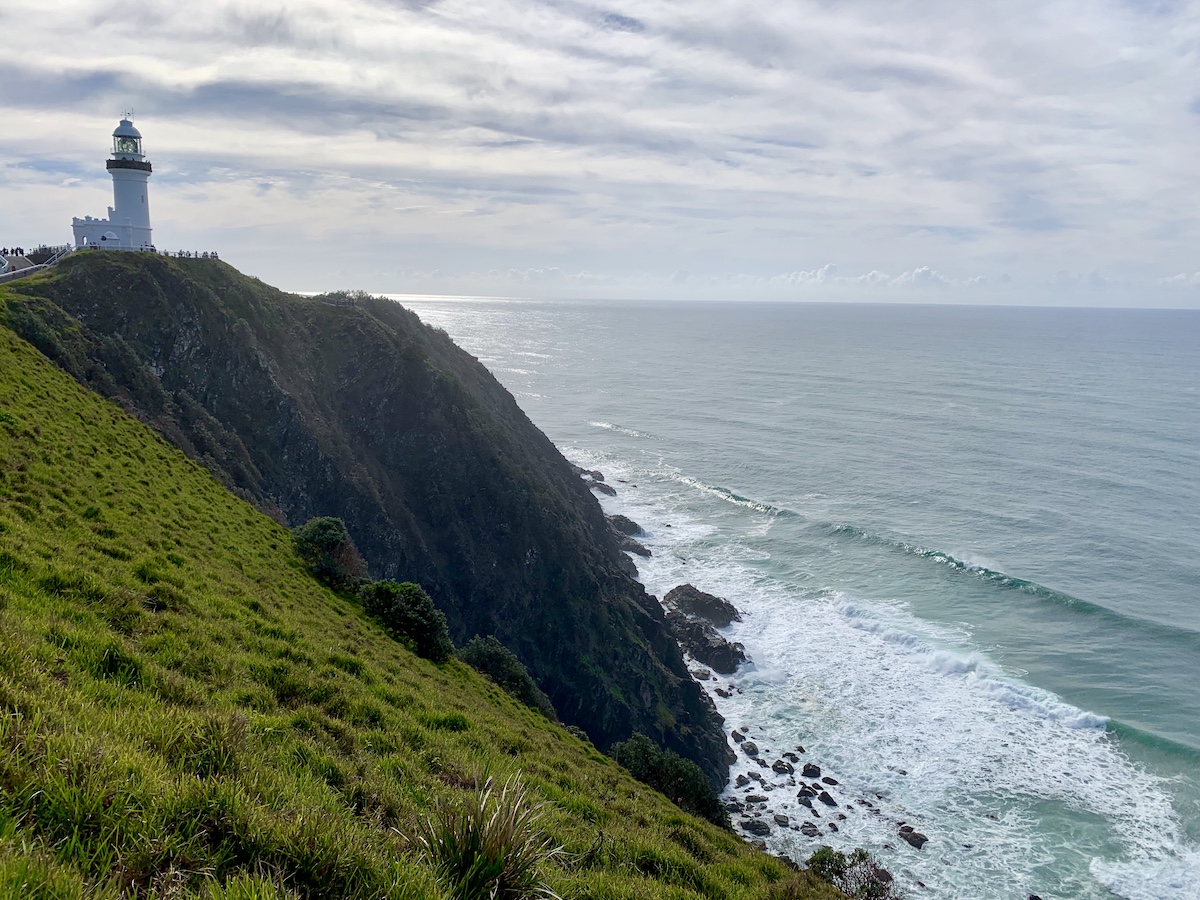 One final drive back up the M1 to Brisbane, catching some rush-hour traffic, a hectic pack and then it was off to the airport early the following morning to send them on their way to my sister in NZ. From a balmy mid-20s winter in Queensland to single digits in Wanaka!!

As for me, well it’s time to knuckle down and start shifting this ballast I’ve acquired over the last year. With that in mind, I’ve entered the Noosa Classic in mid-August and I’ve got the Third de France starting at the weekend. More on that later. 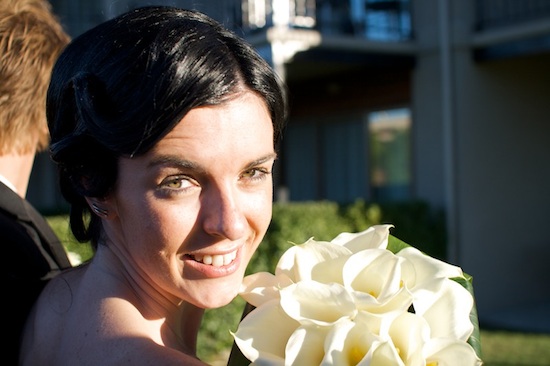 Bevin and Jonny tied the knot in Wanaka at the end of February, so that was a perfect excuse for a holiday. Mum & Dad came to Sydney to visit myself and Jacqui for a few days first, and Cliona was able to make it over to Wanaka as well. Cormac, Belinda, Jacob, Dave and Isabella couldn’t make it due to the effects of the bloody GFC, which was a bit unfortunate.

I arrived on Tuesday and went straight to Fergburger in Queenstown to sample the best burgers in the world, and to take a photo to annoy Sean, Tom, Dave and Kev back in Ireland as it was a regular stop for us on our ski trips to NZ. Bevin had kindly purchased some Brewski for me, which was awaiting my arrival in the fridge, so that made for a perfect start to the holiday.

Cliona, Margaret and John were due to arrive the following day, and Jacqui was going to arrive on Friday, so I had some time to myself. I rented a bike and rode the offroad trails to Lake Hawea and back., enjoying nice scenery and a well-tended trail, but no real singletrack - definitely a trail for tourists rather than MTB enthusiasts, but worth the ride nonetheless.

The lead-up to the wedding was pretty easy going. Bevin and Jonny seemed to be pretty chilled about it all, so, apart from all the dramas suffered by Cliona, John and Margaret on their travels from Ireland, the days beforehand were pretty relaxing. The day itself was good fun. The wedding wasn’t starting until 4:30, so myself and Jacqui went for a bike ride along the lakeside in the morning. I’d volunteered to take unofficial photos, so I had to gather Bevin’s collection of lenses to play around with and that was it.

The ceremony was held down at Wanaka Station Park and the separate parties arrived in classic cars which looked great. They boys were stylin’ in their matching Nikes and the bridesmaids looked stunning! After a short delay, Bevin showed up and looked absolutely beautiful. My sisters scrub up well :-) Cara, their dog, ran around making sure all was well during proceedings, which were conducted under a huge, ancient sequoia tree. Jonny’s cousin, Scott, was the celebrant and all went without a hitch, apart from the best man, Jonny’s brother, Tom, almost fainting in the heat! The formalities over with, it was back to the hotel for the reception, speeches, drinks and dancing.

We still had a couple of days to relax before flying back to Sydney, so we just chilled out, visited Puzzleworld and went for a stroll up Mt. Iron. Since we were flying out of Queenstown, I insisted on another visit to Fergburger before leaving!

Since then, I’ve been a bit slack getting all the photos organised as I was hampered by the fact that each of the cameras used had a different time zone, and the new Aperture 3 is frankly atrocious at adjusting the photos’ metadata, leaving me in the end to sort the photos manually.

Anyway, here they are: Wedding Photos and general Holiday Photos.

The Christmas break provided a good chance to kick back and relax. This year we headed up to South Golden Beach for a week, to spend the holidays with Jacqui’s Mum and the rest of her family. Days were spent reading, playing board games, visiting the beach (at the end of the street), eating at various cafes in the area and generally taking life easy. (photos)

As of a couple of days ago, I’m now an uncle for the second time. My sister Cliona, and her husband Dave, had their first child, Isabella Maria, at 04:30 on August 20th. To quote Jacqui: Oh she’s a very pretty baby! Not all screwed up like most of them. Couldn’t have put it better myself.