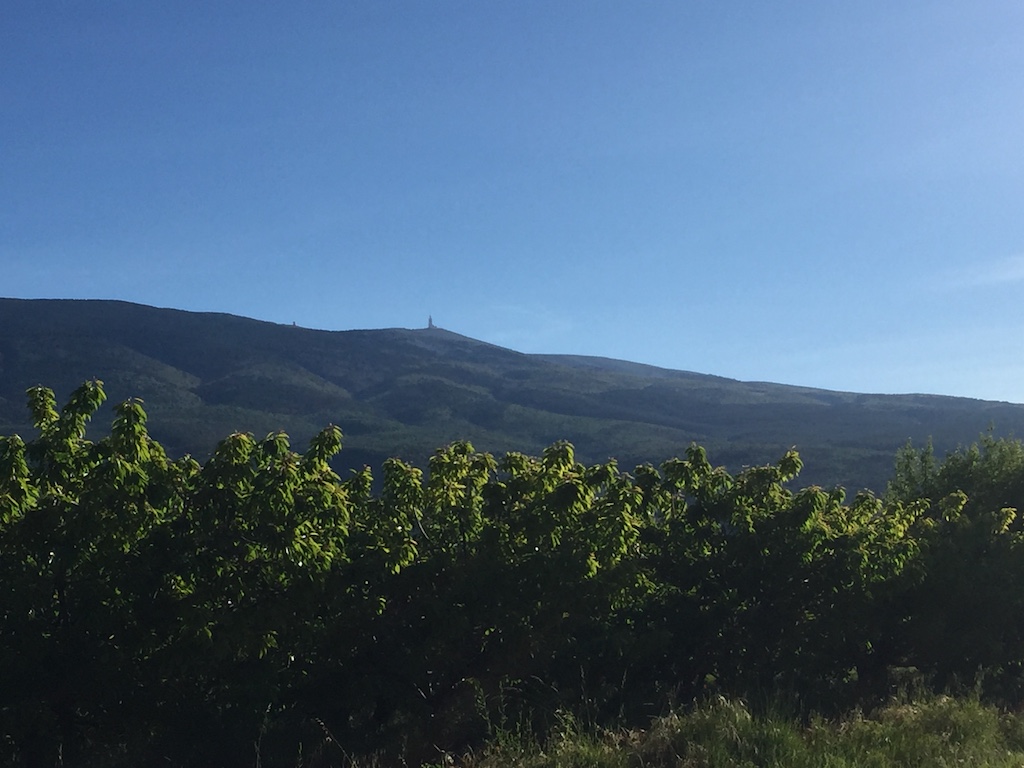 Mont Ventoux, also known as le Géant du Provence, the Giant of Provence, is one of the most famous Tour de France climbs and has been on my to-do list for a while. Given that May is still quite early for some mountain passes to be open, detouring to France to ride Ventoux made perfect sense as it’s both far enough South and low enough to be clear at this time of year.

There are three ways to the top; two hard ones and an easier one, with the one starting in Bédoin the hardest and ‘official’ Ventoux climb. If you’re only going to ride one side, then the Bédoin side is the one to do. However, there’s a club called les Cinglés du Mont Ventoux, loosely translated as The Mont Ventoux Nutters, to which you gain access by riding all three sides in one day. I figured I’d give it a go, so I sent off my €20 and they sent me a brevet card which needed to be stamped at the bottom and top of each climb. 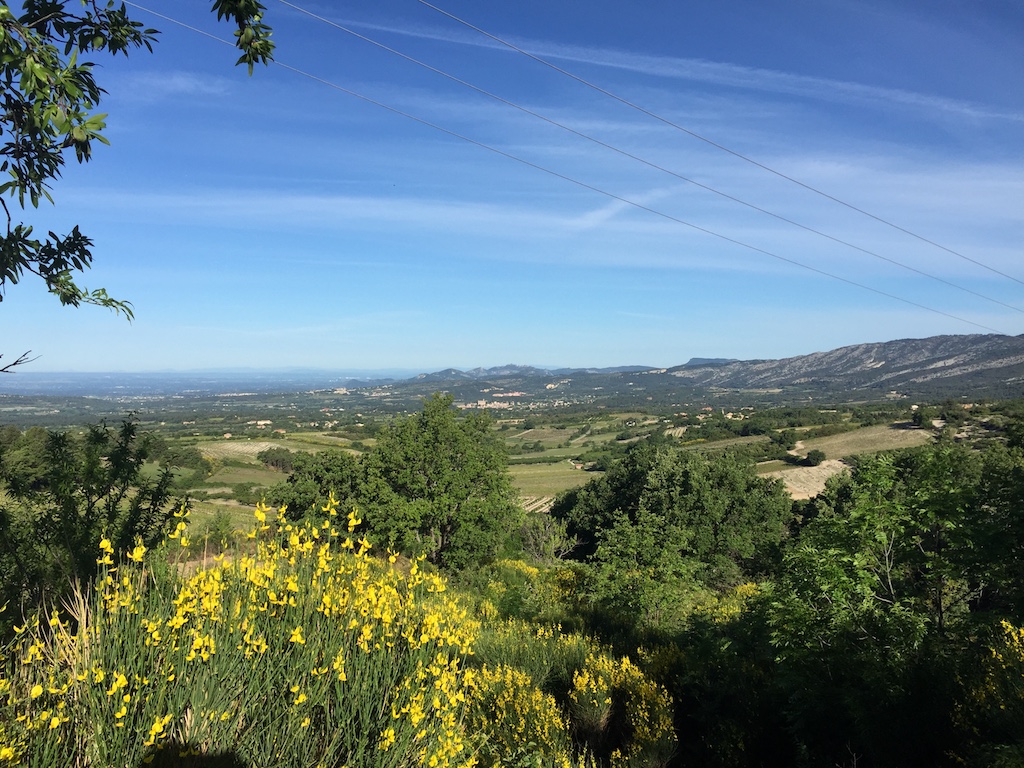 The recommended route is to start in Bédoin to get the hardest climb out of the way first (21.5km @ 7.6%), then descend to Malucène to climb from there (21km @ 7.3%), leaving the easiest climb from Sault until last (24km @ 5.1%). So, with a hearty breakfast sitting in my belly, I descended the 4km back into Bédoin, got my card stamped, turned around and got the day started. 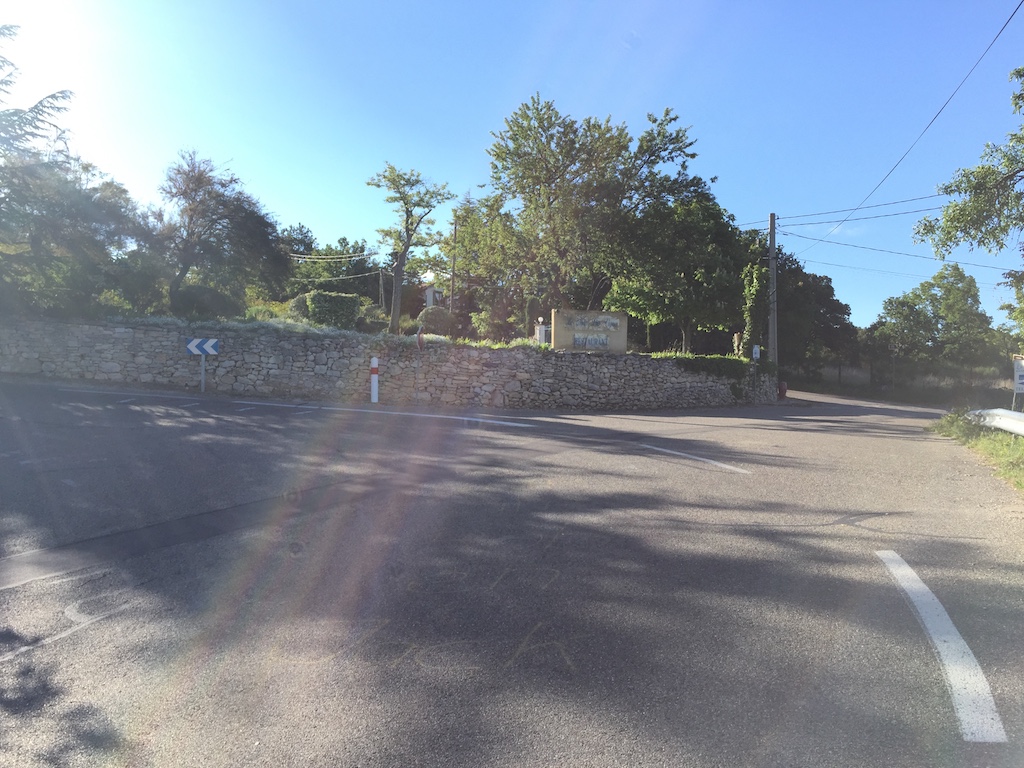 The first few kilometres are comfortable enough and there’s ample time to admire the scenery, but once you get to the St. Estève bend the gloves are off and you have to knuckle down to some hard work. The next 10km to Chalet Reynard averages 9% and there’s nothing you can do except grind it out. Even with the easiest ‘normal’ gears you can get on a road bike, 34x32, it still took me an hour to ride that section at an average heart rate of 161 (max. is 190). 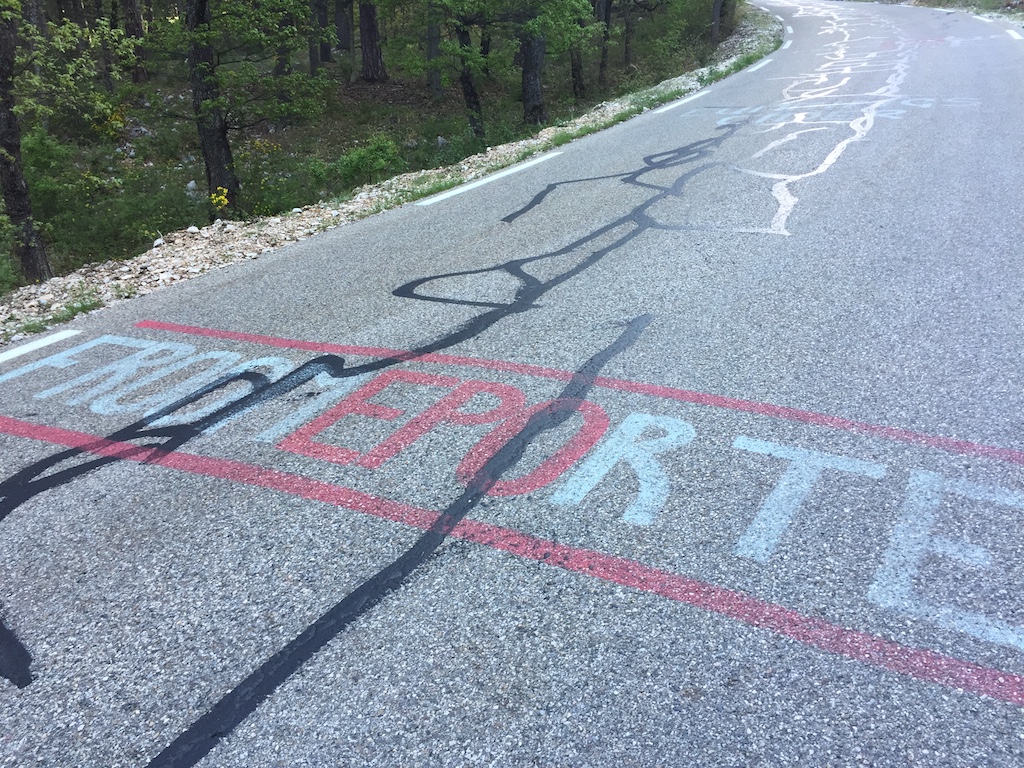 The gradient never lets up, so there’s no easy sections to get your breath back. However, there’s plenty of graffiti left over from the various times that the Tour de France has passed this way, including one of Marco Pantani, who last rode Ventoux in 2000. I suspect it was painted in recent years rather than lasting from 2000 though! Shortly before Chalet Reynard there’s also a small hut with various items dedicated to early car races on Mont Ventoux - it was famous before cycling too! 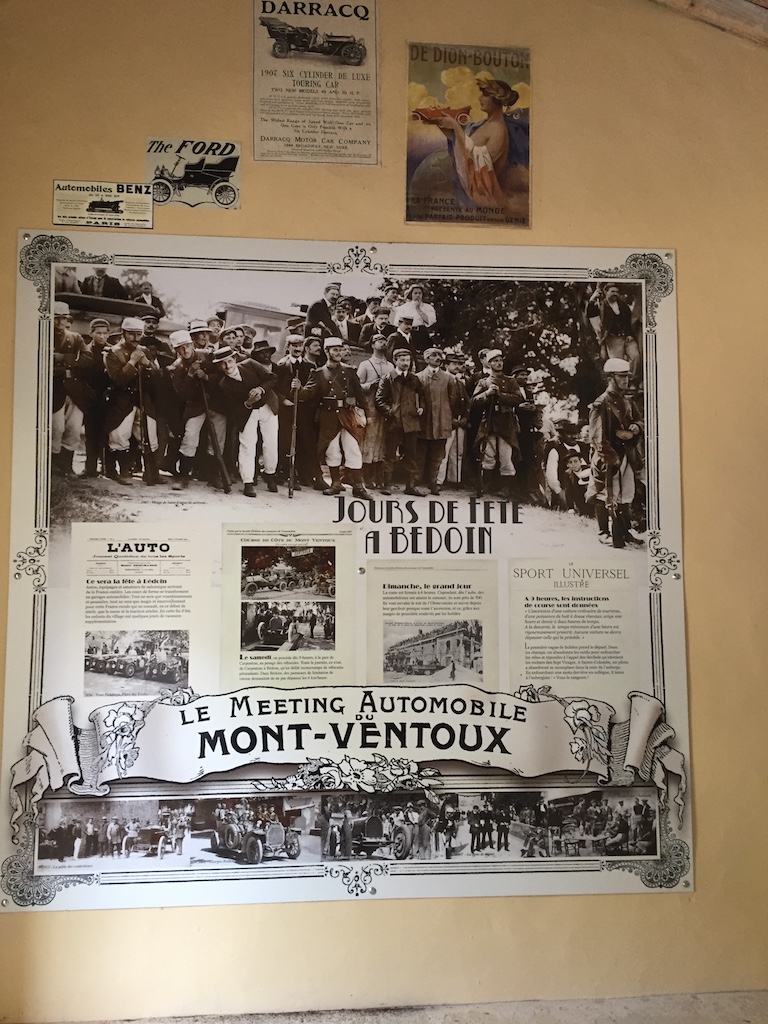 The weather station at the top of the mountain is the beacon letting you know exactly how far you still have to go. The hard part is through the forested lower slopes so you rarely see the top, but, as you approach Chalet Reynard, the trees start to open up and you can start seeing the progress you’ve made. 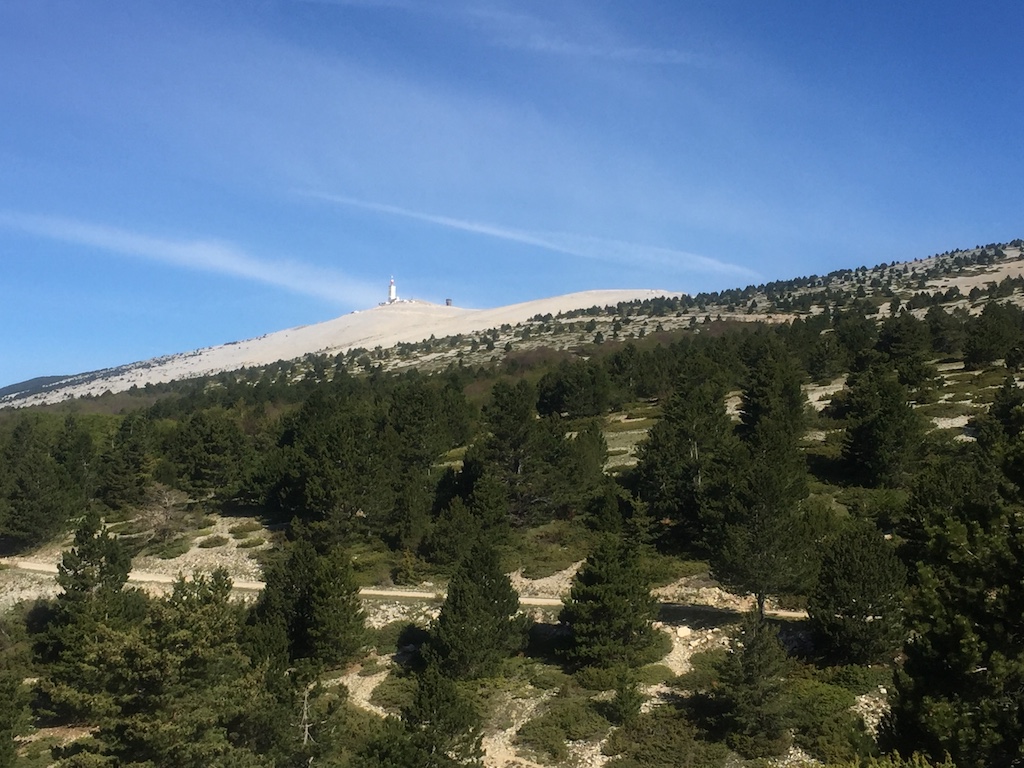 I took a breather at Chalet Reynard and refilled my water bottle before continuing on. The gradient eases back a bit from here to the top to ‘only’ 8%, but it was partially replaced by a bit of wind. Mont Ventoux is known for some ridiculous winds, with last year’s stage of the Tour needing to be shortened as there were 100km/h+ winds blasting across the exposed top. It wasn’t that bad for me though and after some more plodding I finally made the top. Success! 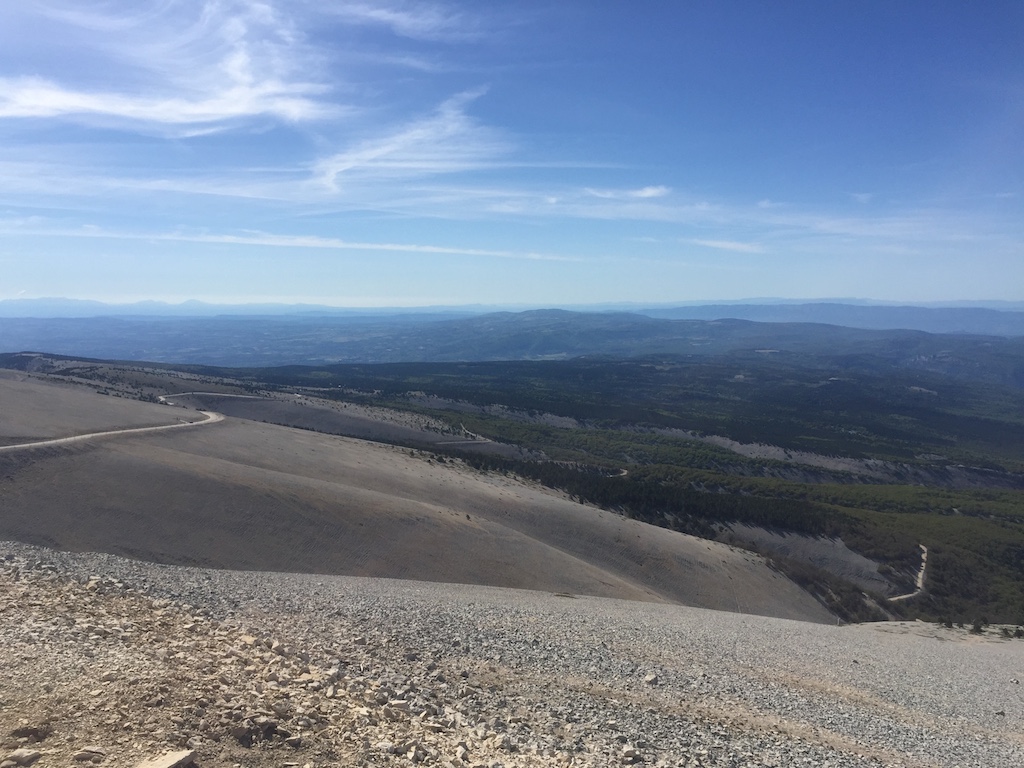 The downside to reaching the top was seeing that there was a barrier across the descent to Malucène, with a digger and various trucks working nearby. I approached one of the workers to see if the road was closed and he said yes. I asked “even for bicycles” as often workers are quite happy to let bikes through, but today it was not to be. Road closed for everyone. 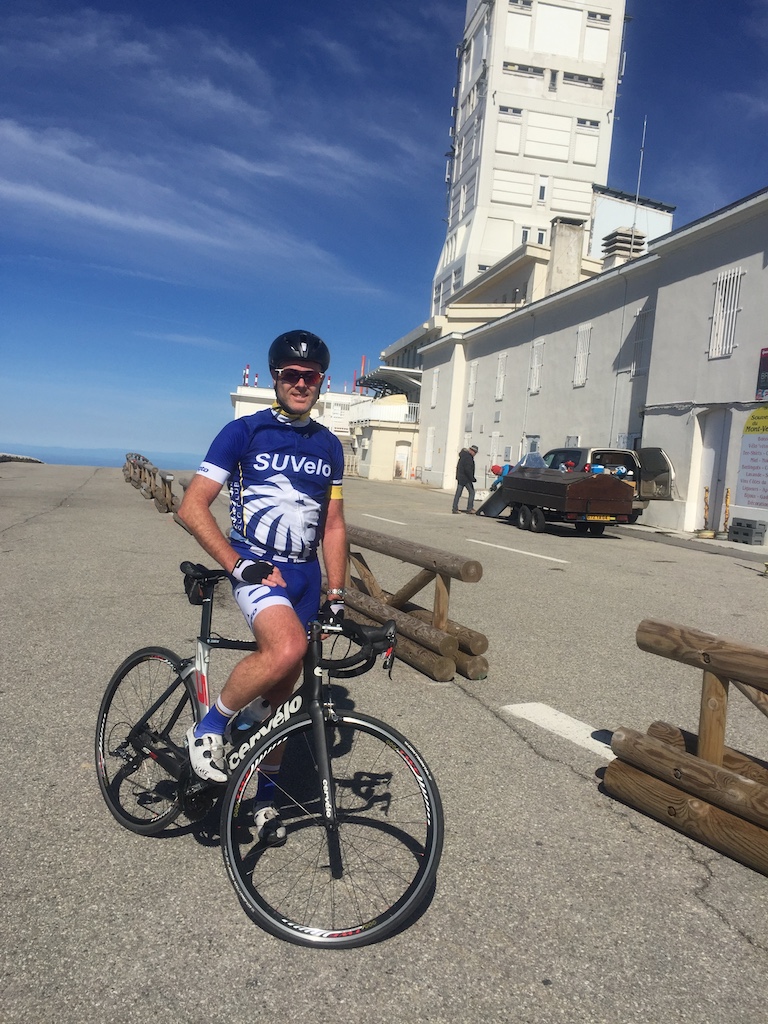 That was a bit of a pain in the arse as it meant the attempt at three-in-one-day was over and done before it got going. I got my card stamped at the top anyway and figured I may as well do the Sault climb too. The top section of the descent wasn’t as much fun as I’d anticipated. I find I usually take a day or two on these trips to get my eye in and get comfortable reading turns so I was a bit cautious as this was my first proper descent and the sudden wind gusts made things a bit unpredictable. After Chalet Reynard I was back in the shelter of the trees, and, apart from a relatively flat bit at the top, I could concentrate on my line for the remaining 15km. 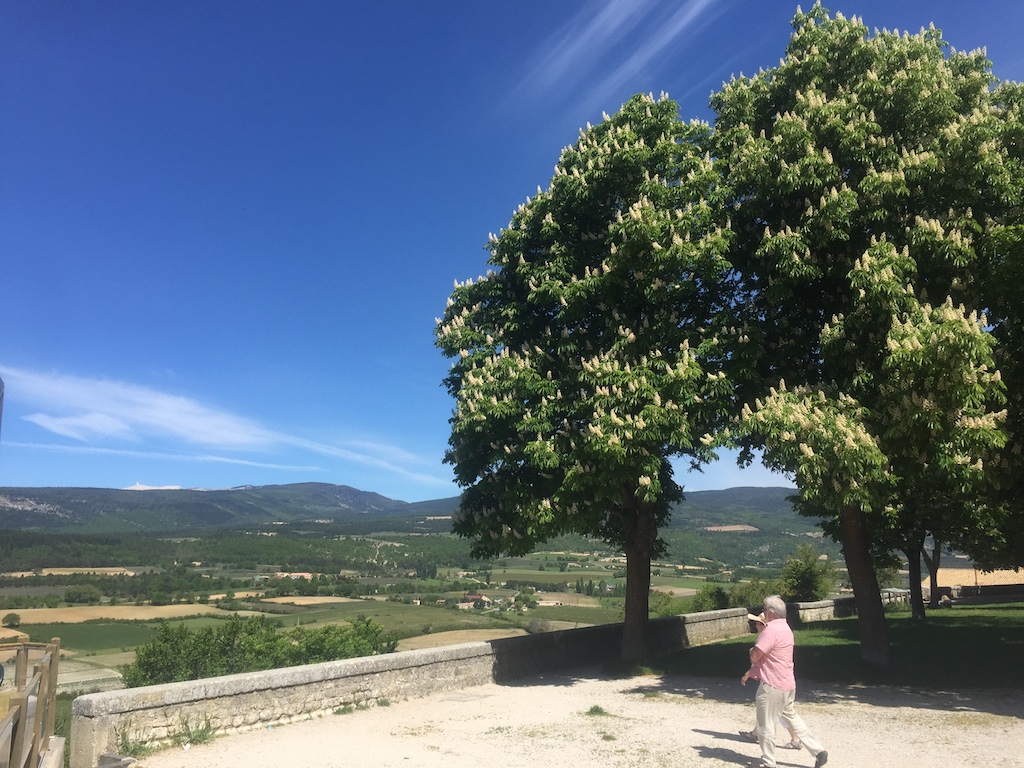 I stopped for a coffee in Sault, sitting out on the terrace of a bar from which I could see the top of Ventoux in the distance. A bit daunting seeing it so far away and realising I’ve got it all to do again. Leaving Sault, there’s a brief descent, followed by a brief bit of harder climbing before the road settles down to its easier gradient and I could look around at the rolling countryside dotted with lavender farms. It’s quite picturesque. The road meanders around various outcrops at a reasonably steady gradient, never gaining massive amounts of vertical but also never slack enough that you get up a decent amount of speed.

By this stage I was getting a bit over it. It wasn’t that it was too physically demanding, more that my heart wasn’t really in it now that the main goal was scuppered. Once the climb from Sault reaches Chalet Reynard it’s the same route to the top from there as I’d already ridden from Bédoin, so I decided I wouldn’t bother with that again and would descend straight from Chalet Reynard. Shortly after making this decision the gradient eased and it was at last possible to keep the pace up all the way to CR.

I had a quick Coke in the sun and then switched on the GoPro for the fun descent back to the B&B. At 9% nearly the whole way it promised to be reasonably quick, even if I didn’t know the route so would have to be a bit cautious into the bends. The top half was great fun, but then I started catching a VW and ended up stuck behind him for the second half. The popularity of the climb meant that there was a steady stream of cyclists coming up the other way, plus fairly regular cars, so I wasn’t comfortable trying to go around him. Thankfully he seemed up for it and kept up a reasonably quick pace so it wasn’t ridiculously slow. 1h10 to climb up, just under 12mins to get back down. Good fun!