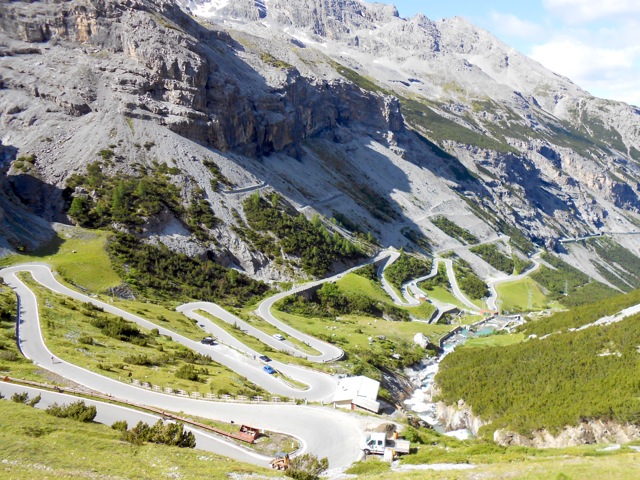 A few years ago, while watching the Giro d’Italia late at night and admiring the stunning mountain scenery, I mused that I should really go and watch a Grand Tour some day. The Tour de France, as the biggest of the Grand Tours, is always super-hectic as it’s the one everyone wants to visit. However, when I discovered that 2017 was to be the 100th edition of the Giro, my plan was hatched. I was going.

I picked out all the major mountains I’d never ridden before and set about some route planning to see how many I could fit in. Most are in Italy, apart from Mont Ventoux and a few Swiss stunners just over the border which it would be a shame to miss.

Now that the list is down on paper, it’s bloody daunting: approx. 1400km & 40,000m vertical over 3 weeks! At 85kg I’m far from a natural climber, but I’ve got my 32-tooth cog on the rear and I’m fitter than previous visits to Europe, so we’ll see how it pans out. When push comes to shove, it’s an aspirational list rather than a must-do-at-all-costs list, so I’ll adjust as I go based on how tired I am.

After all the planning and dreaming, here we are. I fly out in 10 days! I’ll be travelling solo, riding in the morning and doing a few hours work in the afternoon/evening.

Day 1: Cipressa & Poggio - ease into it with the iconic finish of La Classicissima, Milano-Sanremo, the first of the Monuments in the cycling calendar. The pros do 298km, I’ll do the last 30.

Day 6: Colle della Fauniera - back to the Italian Alps with a bang! 22.5km at 7.5%, topping out a touch under 2500m. Will notice the altitude on this one. Also known as Colle dei Morti, The Pass of the Dead.

Day 8: Colle della Finestre - the first climb I’m actually nervous about. 18km at an almost constant 9.3%, some of it on dirt roads. Got its name as the view from the top was called ‘finestre sul paradiso’ - windows onto paradise.

Day 9: Colle del Nivolet - Highest climb of the trip, topping out at 2612m. Stunning scenery, so hopefully not snowed in. Hopefully catch the latter stages of the Giro stage finish into Oropa.

Day 13: Passo Pellegrino and the mighty Passo Fedaia. Rewards you with a stunning gorge then kicks you in the nuts with 3km @ 13% straight after.

Day 14: More Giro watching, with Passo Pordoi (both sides), Passo Sella and Passo Gardena. Sella Ronda - some of the most stunning scenery in the Dolomites too!

Day 15: Passo Rolle, both sides. The mountain that first brought the Giro to the Dolomites, 75 years ago.

Day 17: Big day out: Passo Campolongo, Passo Giau, Tre Cime di Lavaredo and Passo Falzarego to finish off. Giau’s another big one: a bit over 10km, averaging a bit over 9%.

Day 19: Off to Switzerland for the Furkapass - Grimselpass - Sustenpass loop, all three over 2000m. Bond movies, glaciers, hairpins and stunning vistas should help to keep the mind off the 130km with 4000m+ of vertical.

Day 20: Backing up: another long day, over Nufenenpass (2478m) “one of the most intimidating prospects in the Alps for a cyclist”, then down the other side and, bugger the tunnel, over St. Gotthardpass and its old cobbled road.

Day 22: All the massive climbs are done, so it’s only fitting to finish with Muro di Sormano and a visit to the museum atop Il Ghisallo. Madonna del Ghisallo was deemed the patron saint of cyclists by the Pope back in 1949 and the museum has gathered the greatest collection of cycling history over the years, as superstitious or grateful champions have donated items to the collection.