Tour Down Under Wrap-up

It’s been a little over a week since I returned from the Tour Down Under and my legs are just about recovered. Here’s the training load over the week: 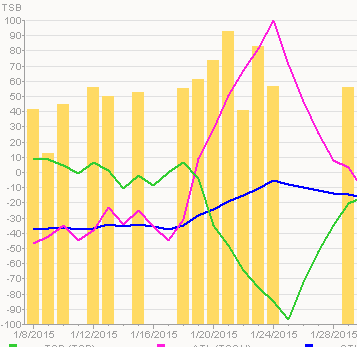 As you can see, training was pretty flat after being away for Christmas and then ramped up hugely for the week of the Tour Down Under.

What happens is that up to 50 of our club travel down to Adelaide with their bikes and spend the week riding through the Adelaide Hills, sampling the small-town bakeries and intersecting with the race to watch the pros do their thing.

In practice it means riding around 100km per day through the hills, so the workload (the pink line) goes through the roof and you dig massive hole of fatigue (see the green line above). During normal training I tend to take a day off if the green line dips under -30, but I hit -98.6 by the end of the TDU! That’s not sustainable, but I knew I could hack it as a once-off, which is why I did almost nothing the following week. The benefit is an almost 50% increase in fitness (blue line) in one week!

It’s also an interesting process, seeing both how far you can push yourself and how your body reacts. For me, all that really happens is that above-threshold efforts become really hard, but I was still climbing at threshold at the end of he week which I was happy with.

After the well-earned rest week, Monday rolled around and it was time to get back into it. Most of my riding for the last few months has been at a reasonably comfortable pace as I built my fitness up, but now that the fitness is there to handle the extra workload, it’s time to start adding some shorter, harder intervals in a bid to get faster.

I stagnated last year, so I’m determined not to let that happen again this year. Time will tell!